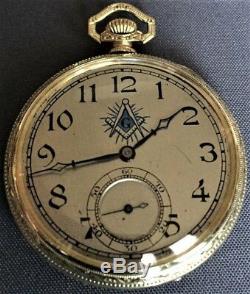 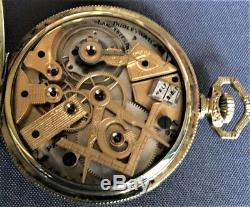 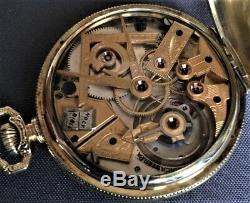 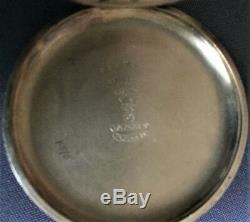 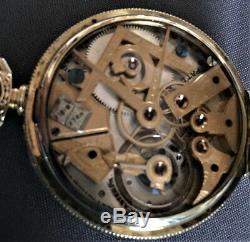 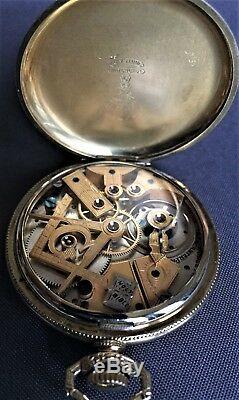 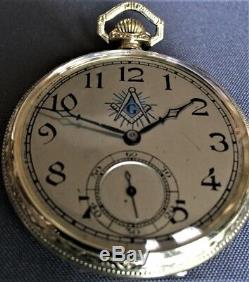 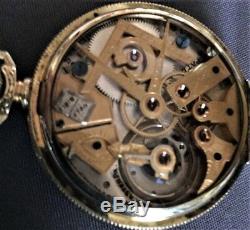 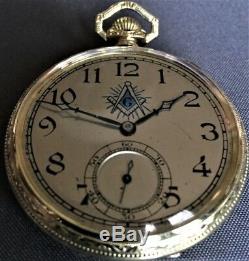 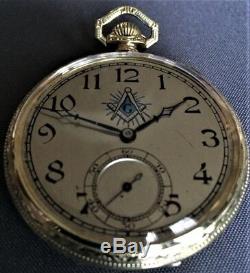 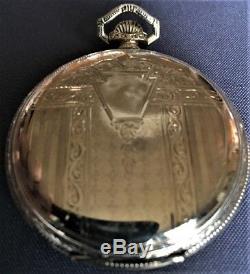 This is a model 2 Dudley Watch. It is pre-owned and in great, immaculate condition. This is an extremely rare piece and the model 2 is one of the most sought after versions. This watch does work and it is in excellent working condition. This watch has serial number 4,940 which would indicate a model 3 but the 3rd wheel bridge is straight and the Bible is flat, which is actually a Model 2 all the way. It also has a super rare and unique Masonic Symbol Dial of which I have not seen another like it.

Again, it is in excellent shape and GREAT working order. A simple wind and tilt and the movement starts and rhythmically ticks away the seconds. Do not pass up this amazing watch as this is a once in a lifetime find! Will try to describe the item to the best of my abilities!

NEEDLESS TO SAY ALL OFFENDERS WILL BE PROPERLY REPORTED AND SANCTIONED AS SUCH. COMES WITH NO BOX OR PAPERS. ALL PICTURES ARE PART OF THE LISTING, WHAT YOU SEE IS WHAT YOU GET. Please check out my other items!

THE HISTORY OF THE DUDLEY MASONIC WATCH. William Wallace Dudley was born in 1851 in St. After completing his apprenticeship, he moved to the United States and joined the Waltham Watch Company in Waltham, MA, where he was employed as a model maker. Dudley moved around from one watch factory to another gaining knowledge and experience. He went to Springfield, Illinois, where he was employed by the Illinois Watch Company.

He later moved to South Bend, Indiana where he joined the South Bend Watch Company. From 1906 to 1920, he was designer and superintendent of manufacturing at the Hamilton Watch Company in Lancaster, Pennsylvania. He left Hamilton at the age of 69 to pursue his dream of starting his own watch company.

Over the years Dudley had viewed many watch designs including those of M. (England), which incorporated two Masonic symbols in the workings of the watch. Dudley was deeply interested in Freemasonry, and was a member of both the York and Scottish Rites, the Nobles of the Mystic Shrine and the Tall Cedars of Lebanon. In 1918, Dudley began work on the production of a Masonic watch with its bridge plate in the form of Masonic symbols a slipper, plumb, trowel, level, square, compass, the letter G. The plates were machined by his friend, Willis R.

Dudley later applied for and was granted patents for the Masonic plate design dated June 29, 1923. According to his daughter, Dudley had been planning his Masonic watch for 15 to 20 years prior to being granted the patent for the design. Wood, local retail jewelers and both Masons, became Dudley's business partners. On May 20, 1920 they applied to the State of Pennsylvania for incorporation. Property was acquired at South West End and Maple Avenue in Lancaster, PA.

This pocket watch was referred to as the Model 1 and used many parts from the Waltham models 1894 and 1897 including the train and escapement. Plates and winding mechanism were made at the Dudley factory, while dials and hands were produced in Switzerland to Dudley's specifications. Cases for Dudley watches were produced by Wadsworth, Keystone and Star Watch Case companies.

By 1923, the Dudley Watch Company experienced heavy competition and dwindling sales of their larger 14-size watches. Responding to the customers desire for a smaller pocket watch, they decided to produce a 12-size, 19 jewel, 14K gold-filled watch which was referred to as the Model 2. The Model 2 differs from the Model 1 by having a silver colored Bible mounted so as to cover the winding pinion which was previously exposed. This watch used the wheels and escapement design from the Hamilton 910 and 912 models. Sales began to decline with the introduction of the wristwatch and by late 1924 the company was heavily in debt. On February 28, 1925 a petition for bankruptcy was filed in the U. At full production the company employed 18-20 men including Arthur and Clifford Dudley, sons of the founder.

Since the manufacturing consisted primarily of assembling the parts, the employees were all. Skilled watchmakers and most were Masons, many of whom were previously employed by the Hamilton Watch Company. Dudley had invested all of his available capital in his watch company, and at the age of 74 found himself out of work and nearly destitute. On February 9, 1938 Dudley died at Lancaster, Pennsylvania. He never lived to see the Dudley Masonic Watch become a valuable, sought after collector's item.

While the company produced other watches, it is the Masonic watch for which Dudley is most famous, and they continue to be highly-prized by both watch collectors and Masons. The Masonic watch continued to be produced by the P. Baker Company from 1925 to 1935, and by the XL Watch Company of New York from 1935 to 1976. 14-size, 19 jewel, open face, "Holy Bible" engraved on winding arbor plate. Gilded pallet bridge matching the plates. Uses Hamilton 910/912 train and escapement. Flat silver-colored Bible covers winding arbor. 3-dimensional silver-colored Bible riveted in place. Third wheel bridge rounded on one end.

This item is in the category "Jewelry & Watches\Watches, Parts & Accessories\Pocket Watches\Antique". The seller is "ballucan1999" and is located in Norcross, Georgia. This item can be shipped to United States.